You are here: Home / MSC Certification 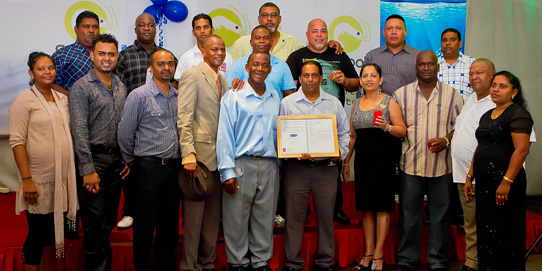 Why we chose MSC certification

“The Suriname seabob shrimp is the first tropical shrimp with the MSC ecolabel; this important fishery in Suriname has set a great example to others.”

The initiative for certification came from the largest shrimp processer in Europe, the Heiploeg Group. This is very unusual: in most cases, conservation organisations or the government are the instigator.

Heiploeg started discussions with the fishermen in Suriname who they’d been working with for many years. Both the fishermen and the Suriname government could see the benefits of MSC certification.

What sets us apart

During the assessment by independent certifiers to see if the fishery would be eligible for MSC certification, the Suriname government commissioned a stock survey. This took place during 2008 and 2009 and demonstrated that shrimp stocks were healthy.

The next step was to agree to better management procedures and the seabob working group was formed. The two fishing companies that fish for seabob shrimp, and representatives from small scale coastal fishermen, government and nature organisations meet once a month. This group oversees fishing practices.

Reducing the bycatch was another part of the assessment process. The fishery was already using escape hatches for turtles, but a large-mesh panel was created on the top of the net, a bycatch reduction device (BRD). This allows young and small fish to escape. Larger fish, rays and turtles escape through the turtle escape device.

The licence for the seabob shrimp fishery now makes it compulsory to work with two escape panels.

How else does MSC certification benefit the environment?

“Economic benefits have not yet been felt. The current recession makes it difficult to ask for higher prices in the market. Furthermore, the MSC certified shrimp still needs to find its market position; it may well require a greater supply to obtain a stronger position in the pink shrimp range.

However, the image benefits are valued by all parties concerned, including Heiploeg.”

How else does MSC certification improve economic prospects for fisheries?

MSC certification has brought many good things to the Suriname seabob fishermen. Their future looks much better, because the certification provides longer-term stability. They are rightly proud of their position and recognition, and have become true ambassadors for sustainable fishing. Colleagues from neighbouring Guyana are keen to follow their example and are about to start the process towards achieving MSC certification.

The fishermen are finding that the environmental benefit of a reduced bycatch is also improving their working conditions. There is much less sorting work on board.

The Suriname government, which was involved extensively during the process and played a major role, is also proud of the results that have been achieved.

“We hope that our example will be followed throughout the region. A larger supply contributes to building up a good market for MSC certified seabob shrimp. That is what we will work on during the coming years. Furthermore, it’s quite a challenge to retain the MSC certificate. There are six conditions we will have to meet within five years.

We need to keep improving and must be able to show this during the annual MSC follow-up audits.”